I’m not sure what that actually means. I was in remedial french at school…sat with the kids that couldn’t read English never mind a second language. I was even threatened with suspension because the head of year told me I had deliberately failed the exam that was to stream us into levels after a couple of weeks of repeating the days of the week and some numbers. If only they’d tried to teach us how to say woodland animals in French, I’d probably have gone on to do a masters at the Sorbonne.

Despite this trauma, I’m decidedly a francophile. I’ve even met upwards of half a dozen French people and liked all of them. A croque monsieur is preferable to an english toasted cheese sandwich, a portuguese tosta mixta or a catalan bikini. However, I’ve never spent more than five days in Paris (where i was forced to share a bed with a young Matt Briggs, now of the South Yorkshire Fire Service. If ever I was destined to be bi-curious, having to share a bed with an excessively flatulent yorkshireman put the kybosh on that) and only two day trips to Calais. 50% of those trips are just a blur though.

Coincidentally, two unconnected friends had told me how good this restaurant was (i mean…two friends who don’t know each other. I’m not contrasting them with my connected mafia friends) AND I happened to get into a conversation just yesterday about french onion soup. As you do. So it seemed like fate when my friend/son Andy suggested we go there for lunch today.

It’s a bit pricey at the weekends, 17,50€ for the set 3 course menu…with a glass of wine…and the menu del día is replete with dishes that require a 3€, 4€ addition to this set price. There were 4 of us drinking wine, so the waiter left the bottle.

I went for onion soup. I just deleted the word french from that…because you wouldn’t say you had an italian pizza in a trattoria, would you?

I’ve never had onion soup before, i realised. And certainly not french style with bread and cheese on top. Tasty enough. I wouldn’t mind experimenting myself with this.

Main course, with my sophisticated pallet i opted for the hachis parmentier…oui, tres chic, non? 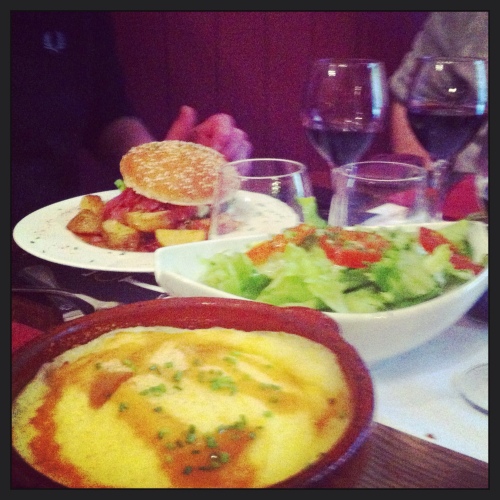 …..it’s basically shepherd’s pie…and what could be better than that. Good to see that British food so impresses the french they have their own versions. Mind you, the french did more for British culture than any other invader of the land…so I think it’s right that we pay them back with delicious food. In the background is Andy’s burger with goat’s cheese. Never sure where to put that apostrophe to make the possessive…how many goats are involved in the making of cheese? And not like it’s theirs anyway…they’d not be able to spread it on their baguette, what with their impractical cloven hooves.

For pudding, once again the French looked to their former subjects for inspiration…rice pudding with nutmeg.

Nice experience and a pleasant place. I think I would have preferred a surly waiter in a wine stained vest and a gauloise hanging from his lip rather than a reasonably polite and attentive fella. Bit more than I would normally spend on a lunch. But at the end of the day…sommes comme un coq en pâte

One thought on “Le petit bistrot”