I try not to cross the rubicon of Gran Via when I’m off work, especially as the centre of Madrid is full to the brim with Christmas zombies, but I read about this restaurant and I liked the name…I’d say I eat a lot more fish than meat, maybe 3 portions of fish for every portion of meat..which makes 4 portions! no wonder I’m getting awful fatsch (Thats “fat” but in a west of ireland accent. I’m channelling my ma)

If you read any reviews of this restaurant you’ll read people complaining about the service…now I tend to take those sort of comments with a large pinch of Maldon…I assume they’re from americans who seem to think good service is about obsiquiousnes, while for me it’s just about getting served and at some point getting the thing you ordered, of course it’s better if the staff don’t treat you like you’re a piece of shit and that your request for a table/drink/food is just disturbing them from their important work curing cancer. There’s not problem with the serving staff in this restaurant, the waiter we had was extremely pleasant and brought us our food and our drink quite happily (and was quite literally a fox…which would have worried me if i’d been a chicken in a coop), the problem here is with the mangement. Obviously, I’m a management guru and shit, so I knows what i’m talking about. When you go in you have to wait for a femme maitre d’ to seat you, and she is far to grand and important to look at you or speak to you, which makes the system rather untenable. I booked on the internet for lunch on friday and received an email the day after eating there that it was not possible for me to book a table. Which was true, as my delorian is at the garage. Maybe it was due to the idea of going into the future and then assessing the booking system from the past, that led to so many people having to stand around the entrance waiting for La Femme to dain speak to you.
Anway we were given a seat in an area that kind of looks like its outside but actually is indoors. It’s a huge restaurant, I’ve no idea how many people can be surved there at a time, once they are given a table. This part of the restaurant looks nice but trying to make it look like al fresco dining means you’re sitting at uncomfortable tables slightly too short for the uncomfortable seats.
Well, the food…the food was great. though I was with someone who ordered better than I did, so I was filled with remource, shame and embarassment. 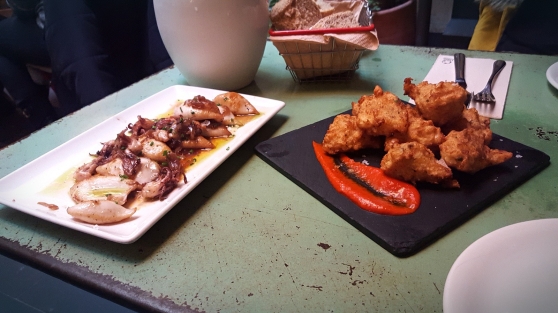 on the left are cuttlefish with caramlised onions, which my dining partner ordered (Grrrr!!) and were delicious. On the right, buñuelos de bacalao (cod fritters) which i ordered which were nice enough.

2nd course, now this is what i fucked up…i ordered the taquitos de merluza (small battered cubes of hake) with roasted red peppers. Chips served in a metal tin. problem was that it was so similar to my first course. stupid and elementary mistake. Plenty of it, so much so that i was bored of them before I’d finished. I suppose Restauranting is different from Theatering in that you don’t want your audience to be left wanting more.

My dining partner ordered much better (GRRRR!!!) and had roast langostinos with avocado and mango. Only reason I didn’t order this myself is because a) i’m not supposed to eat prawns and b) i became a bit obsessive with eating prawns, avocado and mango over last summer and think I prepared it at home and ate it every day for good while.
Dining partner couldn’t finish her’s and I was too full to help. Coffee and a patxaran to finish.
2 bottles of Valdesil Godello white wine (at 20€ each). Total for two 83€. Nae bad.
Yes, i know….I’ve changed, way too flush these days