Why do I keep going on about sous vide? Well, I’m like an apostle or an evangelical or some sort of fanatical shit. I think, at the heart of my mission is my hope that people live their lives better in terms of eating and drinking in Madrid, and outside Madrid. Sous Vide might look like unneccesary faff or fashion… but it delivers outstanding results and turns the cheapest cuts into five star shnizzle. and the faff is outweighed by the lack of faff…it means you can set it all up and pop off to the pub for a few pints before finishing it off before you eat.

My mum still goes on about these ribs I made for her years ago…I think I slow cooked them in a stock and then roast. So if they were good slow cooked, I reckoned they’d be even better sous vide. and they must have been good ribs in the first place…because I made them and my mum has something positive to say about them.

I’d tell you pork ribs are cheap as chips, but that would be a lie. They are cheap but slightly more than chips. you could get enough meat out of them for 6euro for 6 people, especially if you cook them right. There’s 1 of me so I spent 6euro on ribs and divided the rack into 4 so that they would fit easily into a vacuum pack. I poured honey over the ribs and then some mustard, then stuck them carefully in the bag trying to make sure not to get the marinate onto the front part of the bag…wasnt careful enough and had to clean with kitchen towel a few times. then vacuum sealed the bag….set the water bath to 70c and when it was ready I put the 4 bags of sealed pork into it. let it cook overnight and most of the morning (this was about 9pm at night). After watching Match of the Day on Sunday morning/afternoon…I peeled two spuds and sliced them hasselback style..salt and pepper and pinch of paprika and a spoon of butter then vacuum sealed a bag. took the pork bags out and left them to cool to make easier to deal with. put spud bags in the water bath and went to my local to read while drinking beer.

Flashforward 3 beers later. I went home, took the spud bag out of the water bath and turned off the Anova and put it away. Opened up the pork bags and poured the liquid from it into a pan. Put the pan onto a high heat until the liquid had reduced. carefully put the meat onto a raised oven shelf thing (bearing in mind, this meat is so soft it could just fall apart)…poured over the reduced liquid and put the pork into the oven until they browned 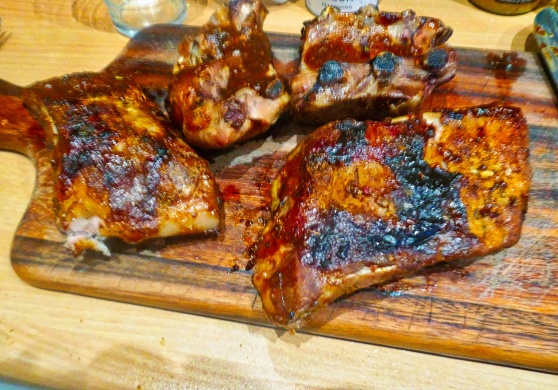 the meat was so tender and tasty. and still had some of the reduced liquid to pout over a wee bit onto the butter braised hasselback spuds

Still a load of meat left the next day, so I pulled out the ribs by hand (just a matter of pulling them out, the meat is so tender) and put the meat into a nice bread roll with melted cheese and topped with fresh spinach