I’ve been working full time for more or less the last 30 years. In that time I’ve worked with thousands of different people. One thing I have noticed is that those people that go on about how much work they have and how little time to do it, tend to be the people you rarely see actually working. Sure, you see them AT work, but more often than not they are making tea or drinking tea or asking people if they wouldn’t mind putting the kettle on, or they are going off to have a fag while their tea is mashing. I’ve suddenly found myself complaining about how much work I have to do and how little time. That’s because I have too much to get done. More tea? Don’t mind if I do.

My employer recently did some sort of streamlining of the workforce and streamlined 85 people. Streamlining in the way that the Imperial Japanese Army Air Force streamlined Pearl Harbour; or the way Thatcher streamlined British Industry (see how well British Industry is performing now? British what now?). This Streamlining was as successful as Mayhem/Gove/Bojo the clown and the Pigfucker’s Brexit if you added in extra absolute incompetence. I said EXTRA incompetence What this means is I’m currently doing the job that 4 people used to do. Unfortunately one of those people is still employed, its just we can’t decide what he…or she, it could be a she….what he actually spends all day doing…but in any case, I’m doing what he used to do. or she. Don’t worry, if he is actually forced to do some work without managing to pass it off to someone else, he…sorry, I forgot, or she….he goes on like it’s the first time anyone in the history of the world has had to actually do something and we should be grateful that he….or she…was there to do it and that next time it’s our turn to do whatever “it” was.

Anyway, that’s one reason I’m rarely able to update this blog. I go to work, I come home, I go to bed, I wake up early in the morning panicking about the work I was unable to do the day before and which will bite me in the arse today, then I go to work…then I come home and I go to bed. and repeat. This has slightly changed recently because a great sandwich place has opened up near my work. So in the bit that says “I go to work” I often (but not always) manage to nip out and buy a sandwich and eat half of it at my desk, and have the other half when I get home, before I go to bed. 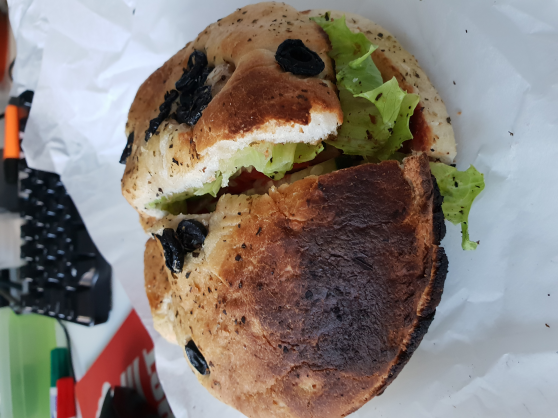 the sandwich at my desk….

oh cry me a river! turning your head to one side is sooo fucking difficult. the sandwich at home before bed. yes that’s a badger.

Now, before this place opened there was nowhere to get a decent sandwich in Madrid. Unless you’re talking about a deep fried squid sandwich, of course.

There is a chain of sandwich shops called “Rodilla” (meaning “Knee”) but I wouldn’t call them “sandwiches”…they are small slices of sweet shitty bread with the crusts cut off…I know! like as if you were a spoilt, fussy 3 year old…which then has mush shoved into the front of the bread. the mush comes in various colours. Madrilenos have great affection for these shit coloured mush “sandwiches” and the chain itself. But I imagine in the same way that Yorkshire people (officially “The Worst People in The World”) have affection for Sir Peter Sutcliffe…”call that a ripper, your southern jack ain’t owt compared to god’s own ripper”

This place is called Dilieto and is the answer to my hopes and dreams. My hopes and dreams are small and pathetic, solely based on a decent sandwich shop opening up in the desert that is Madrid and preferably near my work.

The place is run by two sisters from Gijon whose brother has a successful sandwich shop on Fleet Street in London. I have a “melt” with focaccia (they have with olives, with herbs, with sun-dried tomatoes or with jalapeños…the least nice of these is the latter) and filled with chicken escalope, cheese, bacon and salad, This costs 5euro and is bigger than my head. As I say, I only have half for “lunch” and the other half when I get home at around 10-11pm

“lunch” is when you eat something at your desk while getting work done. In the old days, before Neo-liberalism and the failure of capitalism, lunch was a meal you enjoyed somewhere between the hours of getting up and the hours of going to bed. I wonder what medieval surfs called “lunch”

Yes, I know…I’m not moaning. I do realise how lucky I am to actually have a job and how lucky I am that I have a job that pays me enough to live on. Not many people these days are lucky enough to have any job, let alone a job that pays them enough to live on. More than that. I even managed to stick 4 and a half grand into a savings account last month. but can’t help wondering if it’s worth it…at this rate I’ll be dead before I turn 50. Not that I’m paid to wrestle hungry and angry tigers, but constant stress has pushed my blood pressure up to worrying levels. thankfully, I lost my hair in my early twenties.